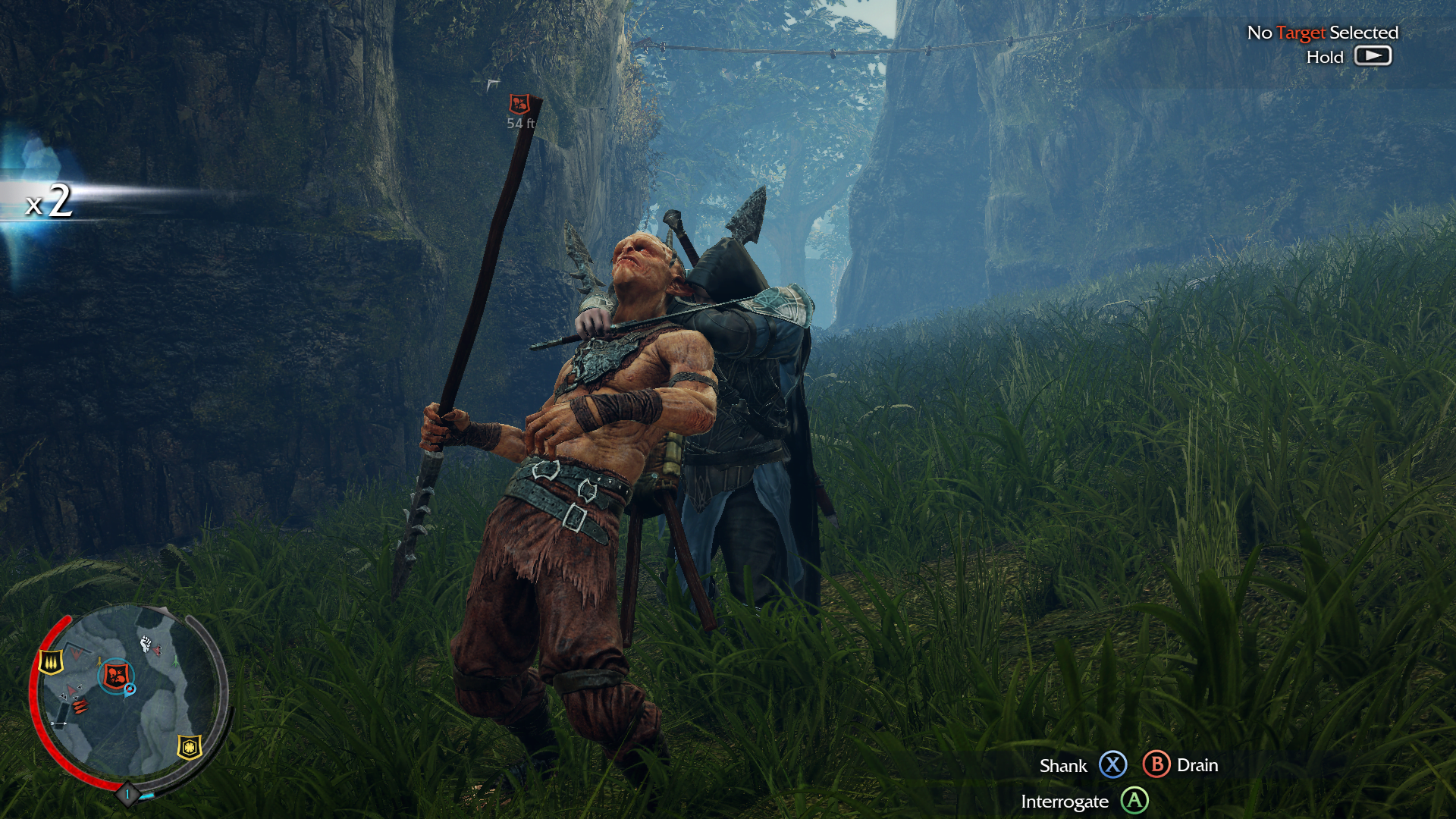 The world looked great, with muddy puddles, foreboding mountains and a thick brown haze over the orc defiled land immediately surrounding the Black Gate. Orcs could be seen patrolling and whipping human slaves at various points around me, so it wasn’t safe to say the least; hostile even. I snuck off in the direction of the lone mission marker. The controls felt great, having an ease to the dynamic movement inspired very much by the Assassin’s Creed series. Simply point in a direction and the player character can handle the in between bits himself. Half way there, I came across a set of command huts set in the middle of a shallow canyon. As I rounded the corner of the last hut, there in front of me was my first captain. 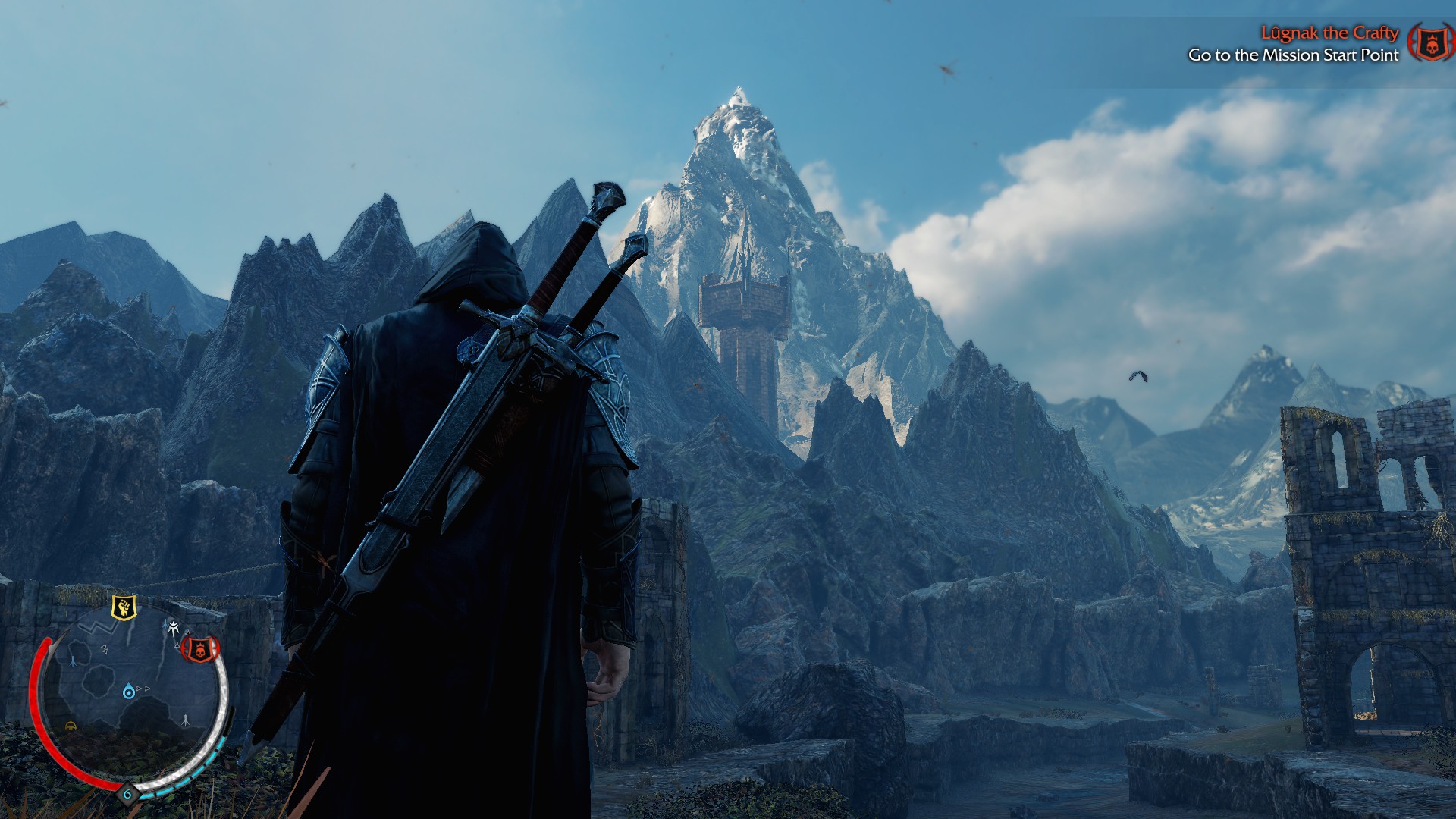 The camera zooms, he points menacingly and promises to turn my finger bones into dice. Already, it is obvious the enemies have character. The battle is thusly on. Being a Warner Brother’s Interactive game, it’s perfectly fine to say they wholly duplicated the combat from their very own Arkham game series. It is a fast reflex based system, rewarding counters and stuns as much as the offensive attacks. The one aspect where Shadow of Mordor does surpass it’s host game is in the finishers. After long battles and many near death escapes, separating a head from an orc’s shoulders never got old. It was a small, brutal reward that kept me engaged in the combat long after retreat was in order. Just to get one more string of awesome executions.

This first captain was far more than I knew how to handle in the very beginning of the game. He and his host of orcs quickly killed me, and the ensuing cut scene showed he had been rewarded for his efforts and promoted in the ranks of the orc army. I was livid. The game had just started and I had already died, with a game mechanic revealed to specifically reward an enemy npc for killing me. Forgetting the quest marker, I marked him for death and made off into unknown parts of the map to find him. I needed revenge. 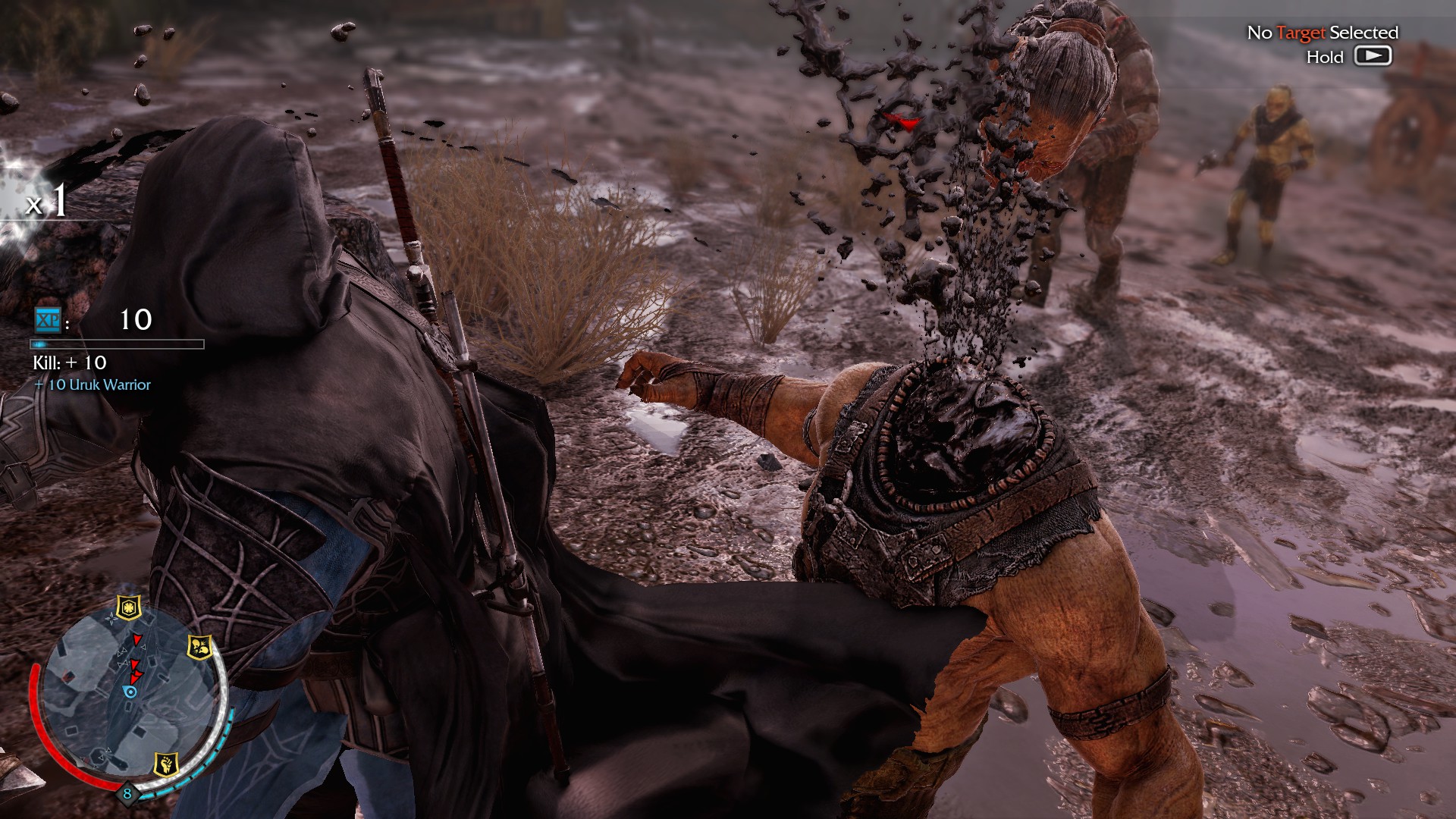 I don’t remember specifically killing the first orc that ended me. In between the beginning and the end of the game, you encounter countless orcs of various shapes, sizes and skills. While they initially seem unique enough, the sheer number means very few were truly memorable. There was my rival, a pitiful orc that was never much a match for me named Gham the Hungry. Seven times he came back from the grave, sporting more bandages and increasing scars, only to be quickly swatted dead. Another time I found an orc that had a flaming helmet, whom I chased from a stronghold into the hills as he fled, where I dispatched him in the morning sunlight (pictured below). 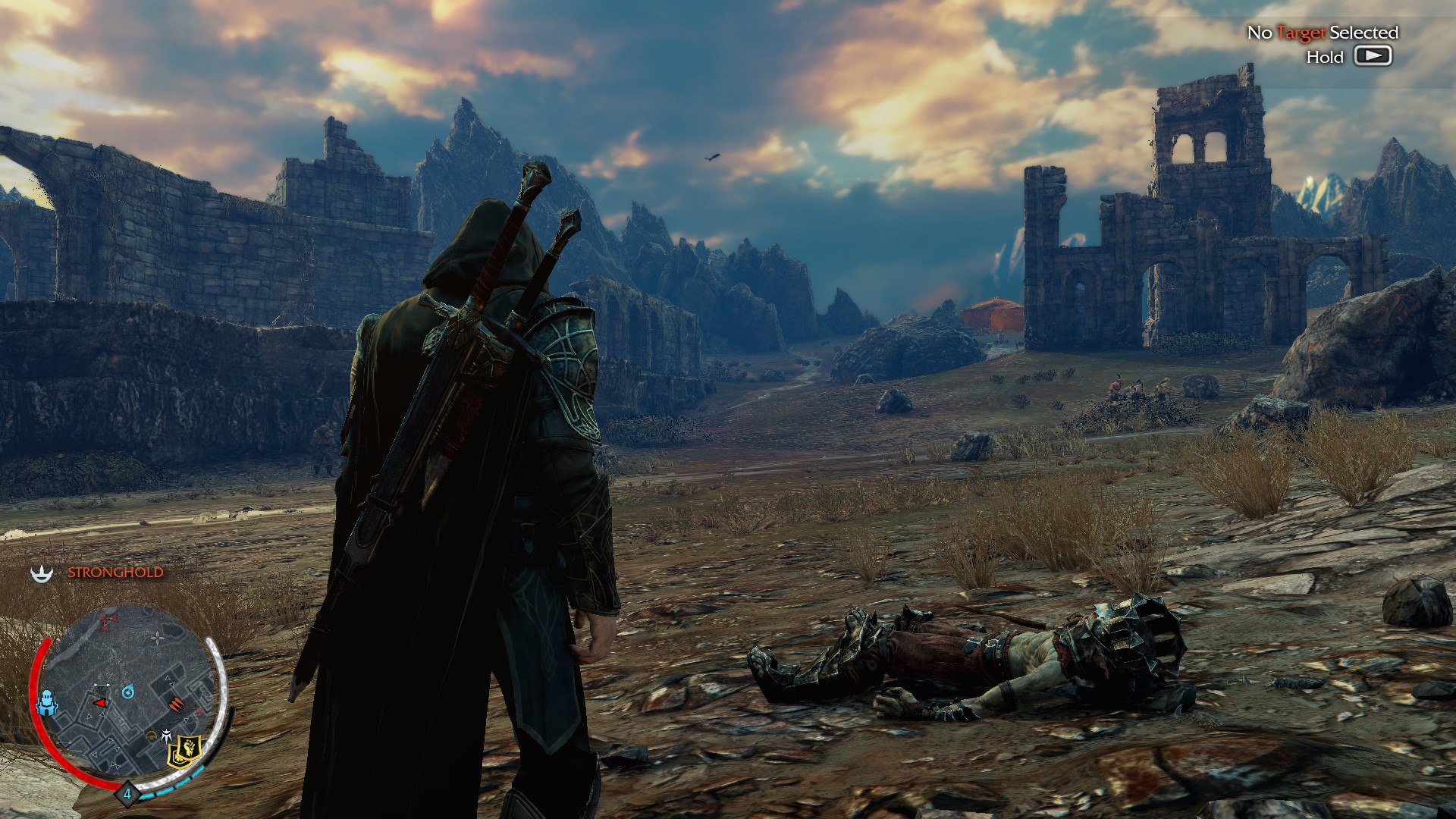 This is the strength of Mordor. The ‘Nemesis’ system that governs the enemy military, coupled with the open world playground, means that interesting stories in any other game had the potential to become personal and unique. The rest the game has to offer is unobtrusive. The story is a passable motivator for changes of scenery and new mechanics to be introduced. Upgrades to your skills and weapons have an immediate impact, making you nigh indestructible near the game’s end. Side activities are plentiful but mundane, ranging from combat activities to hidden collectables to find. These ended up being more of an incentive to get out into the world and allow things to just happen than rewarding. 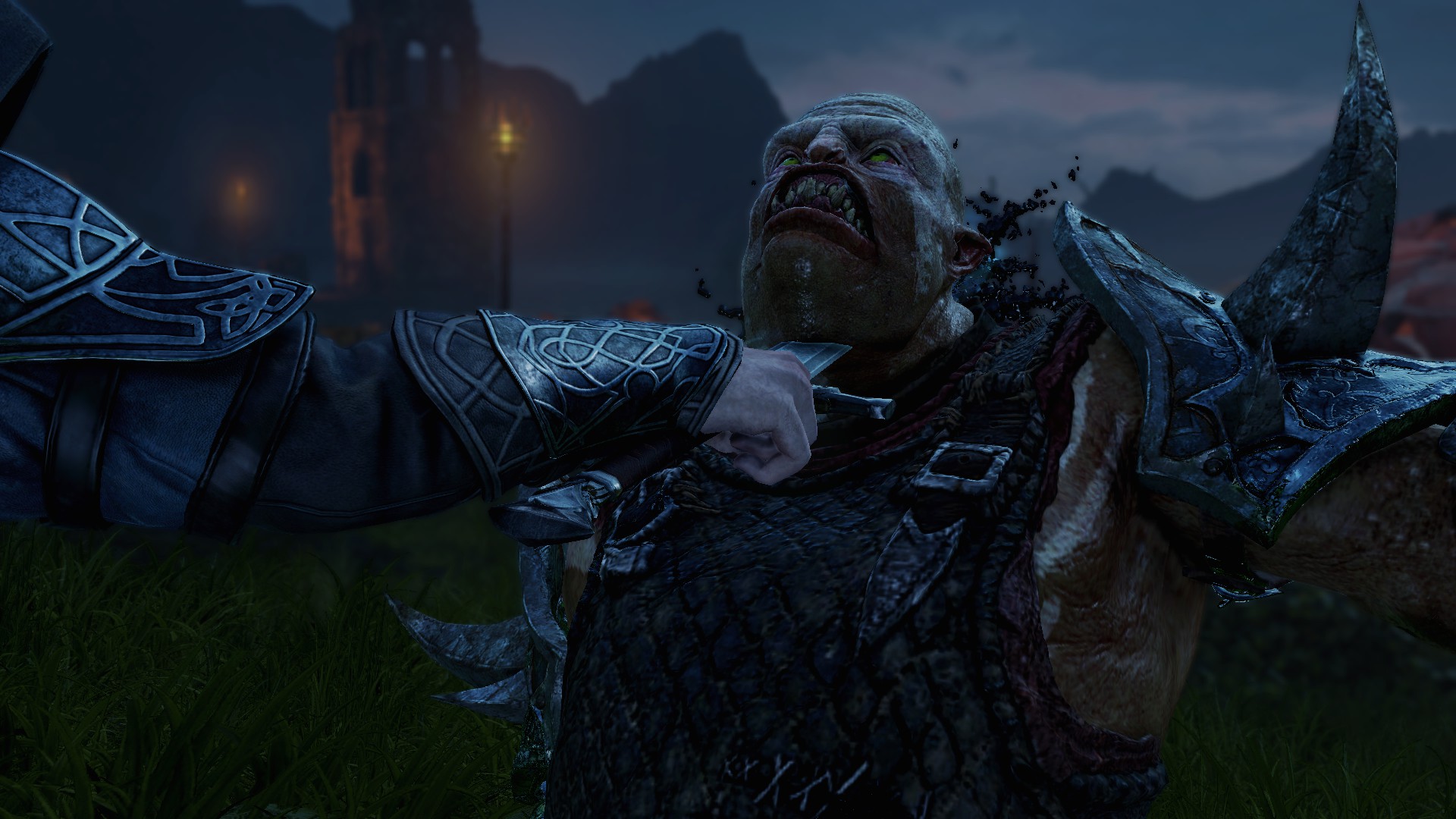 The satisfaction gained from stumbling upon a death-promoted archer, who you recognize by his big ol’ dumb poison crossbow (not to mention the fact that he screams how he will end you for good this time), and finally severing his head after a battle that eventually involves two fresh orc captains with their own patrols in tow makes this one of the most rewarding and refreshing games I have played in some time.